You can read in full extent the speech delivered on this momentous ceremony from the Office of The  President of European Council on Tourism and Trade:

To all the people of REPUBLIC OF ZIMBABWE, 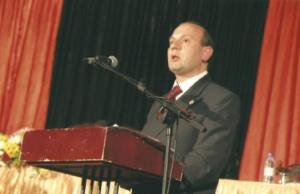 I must say what a privilege is for the all mankind to honor a country that is becoming a FAVORITE CULTURAL DESTINATION.

It is also a great pleasure to address our salute to the majestic people of Zimbabwe, a people that with spirit and mettle have united the south of African continent in the peerless civilization of Great Zimbabwe, that had left to the mankind the legacy of an indelible civilization, with hundreds of monuments of historical and world patrimony relevance, a strong and proud people that had offered to the world heritage countless blessings.

Today when we celebrate Zimbabwe as a cultural and touristic power house, we must not forget that the main credit belongs, without a doubt, to the all people of Zimbabwe irrespective of their race, color, political or religious orientation that from 1979 onwards have been constructing, defying unfathomable difficulties, a life of dignity, liberty and tolerance in a free country.

Today, we come to share the good news that Africa, that recently celebrated 50 years of African unity, has reasserted herself and we come to honor a country of REBIRTH , OF RENAISSANCE, in a world that forgets that the main reason of tourism is imbuing the travelers into local culture, to immerse them in the discovery of the history,  we come today to Harare honor a TRUE CULTURE.

In a world that is loosing the true values, we come today the honor a real TOURISTIC PATRIMONY, in a time in which to many speak and do not act for protecting historical sites and environmental riches, we come to honor  THE SEVEN WONDER OF TOURISM, we come to honor the Republic of Zimbabwe.

We come in this place of Hope, in this place where almost 35 years ago the end of segregation, of exploitation and of colonialism was cried out into the open and confronted with a new name: Harare!

Here, in the city that never sleeps we have all gather to show our support for the values of humanity, of cultural driven tourism.

We are all here in the search for a country that offer to tourists a complete experience, a country that educates spirit, elevates soul and gives everybody a lesson in history and culture.

We all have found in ZIMBABWE the perfect teacher in tourism, offering to all tourists of the world the possibility of a safe, pleasurable and enlightening touristic experience.

Among the reasons leading to awarding FAVORITE CULTURAL DESTINATION  IN 2014 title to REPUBLIC OF ZIMBABWE our report has taken under consideration:

–                      The promotion and support offered to a new concept of community natural protection supporting tourism friendly to nature, with low ecological impact and preservation of natural biodiversity and protection of endangered species and areas, especially rainforest south-African eco-climate.

–                      The preservation of an outstanding historical and cultural patrimony that comprises wonderful sites such as: cultural, historical and rich legacy of Great Kingdom of Zimbabwe, the preservation of the former capital of Shone Kingdom-Great Zimbabwe in Masvingo area with a world class fortification system and palatial complex from 12th century, these are offering a rare insight  for tourists into one of the greatest civilization of pre-colonial Africa and a rare window into traditions of centuries.

–                      Today, REPUBLIC OF ZIMBABWE is creating and offering for tourists an open air museum, a rare collection of historical and archeological treasures that educate and enrich the world.

Based on these facts that can be completed with many others, The European Council on Tourism and Trade decided, unanimously, to declare REPUBLIC OF ZIMBABWE – FAVORITE CULTURAL DESTINATION in 2014.

It is my great honor and privilege to hand over this title to the Minister of Culture and Sports of Republic of Zimbabwe, as an international recognition for all the people of Zimbabwe, all united in the service of protecting and preserving historical and civilization patrimony of your country, in fostering tourism and culture, in the service of the people of  ZIMBABWE,

It is my privilege to handover to you, as representative of culture of THE REPUBLIC OF ZIMBABWE, the award for FAVORITE CULTURAL DESTINATION  FOR 2014.

New opportunities arise for Zimbabwe tourism as the country is declared World Best tourist Destination in 2014 by European Council on Tourism and Trade.

We have the honor of presenting you the full text of the empowering speech by European Council on Tourism and Trade president on this felicitous celebration:

Your Excellency, the President of the Republic of Zimbabwe, and Commander of the Zimbabwe Defence Forces, Cde Robert Gabriel Mugabe;

The Vice President of the Republic of Zimbabwe, Cde Joice Mujuru;

Members of the Politburo;

All Cabinet Minister and Members of the House of Assembly and the Senate;

President of the Chiefs Council and all Chiefs here present;

Members of the Diplomatic Corps;

Ladies and Gentlemen, all protocol observed

As always, the ceremony for WORLD BEST TOURIST DESTINATION AWARD is the embodiment of an idea and the universal proclamation of a country that succeeded in materializing this idea to the fullest.

Last year we concentrated on the idea that in the world of today, tourism is a causeway uniting knowledge and friendship, peoples and countries, a way to promote peace and understanding, a road that leads towards a better future for all.

We see the recipient of the WORLD BEST TOURISM AWARD, ZIMBABWE, not only standing for the idea of a resurrection of Africa and African people, but also symbolizing Africa’s determination to undertake the long journey to global significance.

We have also noted with great satisfaction that Zimbabwe has persistently viewed tourism as one of the pillars of its economy, going forward. Your successive economic blueprints, right up to the current one, the ZIMASSET, recognize the critical value-adding role that the tourism sector can play in your economy.

Your Excellency, we are aware that in 2013 you signed the United Nations World Tourism Organization’s Golden Book of Tourism. We must congratulate and commend you highly for signing that book. Yours was the 29th signature by various world statesmen throughout the globe, who have pledged their support for global tourism, with its critical role of promoting both the economic, as well as the social wellbeing of the world. Needless to say, tourism can do a great deal of social and economic good for Africa, including Zimbabwe.

Mr. President, in our consideration for whom to give this award to, we learnt, amongst many other facts about your country, of your economic model ensuring that local communities participate and benefit from enterprises that exploit and benefit from the conservation of bio-diversity of both flora and fauna, was born here. We are here to urge you along this course, because that makes Zimbabwe a steward of the earth’s flora and fauna, in its pristine condition, for the benefit and enjoyment of all humanity including Zimbabwe’s own posterity.

Your government’s well placed recognition of tourism as an important sector is also evident in your decision to create a stand-alone Ministry of Tourism and Hospitality Industry, back in 2009.

Even more fundamental for us, is your acknowledgement that tourism is a peace sector, constantly building bridges amongst the various peoples of the world.

Your recognition of this truth is evidenced, in part, by the support you have given your Minister of Tourism to travel the world, east and west, ensuring that this bridge between your country and the rest of the world remains intact and promote real people-to-people warmth and friendship.

It is not only for these philosophical reasons that we found your country worthy of this award, the fact is your country if well-endowed with historical and cultural features of great worth and value to all humanity. These range from the massive long-standing architectural structures of Great Zimbabwe monument, and others like it all over your country, to rock paintings and artefacts that symbolize early human civilization.  Zimbabwe is indeed a destination of global note and the recognition of many of your country’s features as UNESCO Human Heritage sites says as much.

We did explain in great detail in our 3rd of May Press Release that we  put out for this purpose, why we found Zimbabwe a deserving recipient of these awards, but my address would be amiss if I failed to refer to the well-known hospitality and peace- loving nature of the Zimbabwean people. It is quite appropriate that you position your people as one of the Seven Wonders that characterize Zimbabwe. Zimbabweans, both at home and in the diaspora, are generally well-known for their hard-work and cheerfulness – they are a wonder indeed.

Last but not least, Your Excellency, Ladies and Gentlemen, it is not only in Zimbabwe that we have found a naturally and culturally well-endowed destination, but it is here that we find an exceptional combination of peace and security, combined with a crime-free environment and an exceptionally hospitable people. Visitors here are bound to feel welcome, safe and secure, and that is probably the reason why the United Nations World Tourism Organization decided to hold the 20th Session of its General Assembly, which turned out to be its most successful, here in Zimbabwe at the magnificent Victoria Falls.

This title is also a challenge because we now expect your country and people to hold what you have in trust on behalf of world culture and tourism. May this award be used to enhance the international standing of the Republic of ZIMBABWE-A WORLD OF WONDERS. It is my privilege and honour Mr. President, to handover to Your Excellency, as the representative of your country and tourism, the Award for theWORLD BEST TOURIST DESTINATION FOR 2014.