On the venue of WORLD BEST TOURIST DESTINATION FOR 2014 official function held in Zimbabwe`s capital Harare, the Director of European Tourism Academy- Academician Mircea Constantinescu has officially presented the insignia and certificate of membership to European Tourism Academy most recent elected member-The Minister of Tourism and Industry of Republic of Zimbabwe-Walter Mzembi.

Here is Academician Mircea Constantinescu declaration on this solemn occasion:

We are here to award to Dr. Walter Mzembi, the Minster of Zimbabwe, the Academician status and Medal of Honor, by the European Tourism Academy. 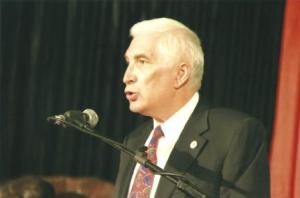 We may say from the beginning that the curriculum vitae as well as the entire activity of dr. Walter Mzembi are remarkable and represent a very successful combination between high level knowledge and expertise, and efficient action implemented in different areas of the public service.

Dr. Walter Mzembi is a very resourceful person and a man of many talents.

His initial activity in the area of mechanical engineering, mining activity, water resources engineering, development and management, land resettlement and agro industrial management provided him with extensive knowledge and expertise. This is also a confirmation that his doctorate in management is well deserved.

The studies and diploma in Business and Governance studies of Dr. Walter Mzembi gave him credentials for being a knowledgeable member of the Zimbabwe government and of the different Parliamentary bodies and committees.

Dr. Walter Mzembi is at the same time a great patriot. He loves his country, Zimbabwe, and the people of Zimbabwe.

He put his enthusiasm, energy and knowledge in making a better life for the people and promoting the image of his country all over the world. 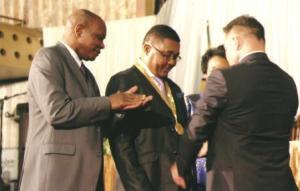 One may think that in a large and complex country like Zimbabwe, being a Minister of Tourism may be much easier than in other areas of activity. But what the international tourist visiting Zimbabwe nowadays might see is only the tip of the aisberg. Practically all the Zimbabwe economy is benefiting from and contributing to a successful tourism, making the tourism the third largest contributor to the Gross Domestic Product, after mining and agriculture sectors.

Dr. Walter Mzembi’s expertise in all these areas was extremely useful.

Mother Nature was generous with Zimbabwe. The numerous natural reservations represent a valuable asset and create a legal framework for preserving the natural resources and wonderful landscapes, as well as building a tourism structure. After our working trips and evaluations of many countries of the world, we know that only the beauty of a scenery does not make a tourist attraction and does not bring revenues to the people.

You need modern infrastructure, need people to provide services and stewardship, need financial and human resources, need communication and good will, and above all you need to be proud of your country.

Dr. Walter Mzembi knows all that, and since 2009 he and his team, with the support of the entire Zimbabwe government, developed and implemented a successful strategy for the Zimbabwe tourism.

Dr. Walter Mzembi is a born communicator and diplomat.

And this is not a pure laudation. The recognition of his merits in this area are confirmed by the appreciation of the Institute of Public Relations, by the African Travel Association, by the United Nations World Tourism Organization, by the Institute Of Cultural Diplomacy, and by many other national and international professional bodies.

But there are not the titles and diplomas that finally count, but the results, and Dr. Walter Mzembi, as Minister of Tourism of Zimbabwe got remarkable results since 2009. He realized that a continuous development of domestic tourism will not be enough. The tourism of Zimbabwe, as the entire Zimbabwe nation must be reconnected to the world.

It was not an easy task for a country that has been confronted with an unlawful isolation for more than a decade. The president Robert Mugabe, the Zimbabwe Government and Parliament, supported by all the Zimbabwe people, played and essential role in installing again Zimbabwe into the great concert of the nations.

Dr. Walter Mzembi was part of this continuous effort of communication and diplomacy inside and outside the country, and his role as Minister of Tourism was important and with remarkable results.

So there is almost no surprise that with remarkable personalities like Dr. Walter Mzembi, Zimbabwe was nominated as the 2014 Best Tourist Destination by the European Council on Tourism and Trade, award handed over by President Dr. Anton Caragea during an official ceremony.

As a recognition of his contribution to the development of Zimbabwe tourism, we are proud to hand over the title of Academician member of Honor and to bestow the Medal Of Honor to his Excellency Dr. Walter Mzembi, Minister of Zimbabwe tourism, and to congratulate his as the newest academician of our European Tourism Academy.